Message threading is a feature that allows users to ask questions, give feedback or add context to a specific message without disrupting the conversation flow. A message thread refers to a collection of messages grouped together, consisting of a parent message and its replies. It can have the following elements: 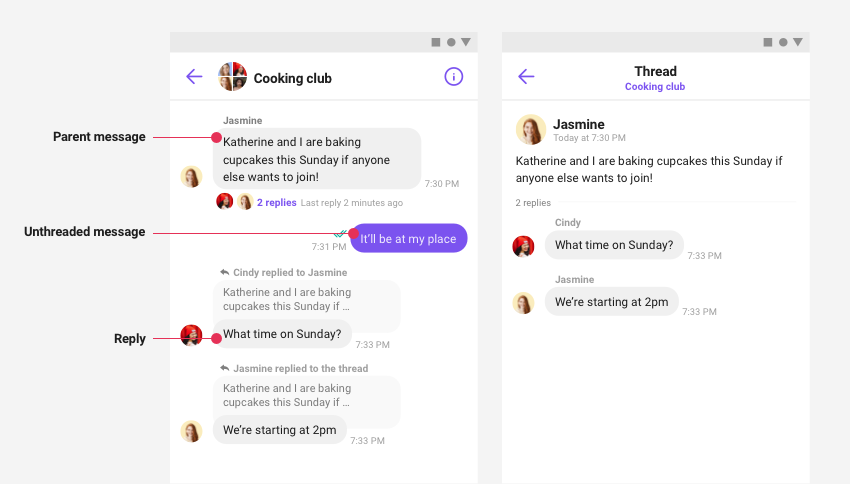 Message threading can be widely used to help conversations flow smoothly while keeping users engaged. Message replies in a thread are common among popular messaging platforms, such as Slack and iMessage.

Refer to the following limitations before using the message threading feature:

You can retrieve messages and their replies in a specific thread.

The following table lists the properties of the PreviousMessageListQuery class.

You can also limit the number of returned messages or the order of the results.

The getMessagesByTimestamp() and getMessagesById() methods of a BaseChannel instance returns a list of BaseMessage objects. By using these methods, you can retrieve messages in a specific channel according to a MessageListParams object.

The following table lists the properties of the MessageListParams.

By using the getMessagesByTimestamp() method, you can retrieve a set number of previous and next messages on both sides of a specific timestamp in a channel.

By using the getMessagesById() method, you can retrieve a set number of previous and next messages on both sides of a specific message ID in a channel.

You can retrieve replies of a parent message if you can determine the parent message like the following. First, create a ThreadMessageListParams object and set properties related to the thread where the target replies belong to.

The following table lists the properties of the ThreadMessageListParams.

With the timestamp of the parent message, you can retrieve its replies by passing a TreadMessageListParams object as an argument to the parameter in the getThreadedMessagesByTimestamp method.

You can retrieve a specific message by creating and passing the MessageRetrievalParams object as a parameter to the getMessage() method.

Reply to a message

You can reply to a specific message in a channel through the sendUserMessage() or sendFileMessage() method. To do so, you should create a UserMessageParams or a FileMessageParams object and then specify the parentMessageId property of the object. Sending reply messages works the same way as sending regular messages to a channel except replies have an additional parentMessageId property.

Reply with a text message

When replying to a message through the sendUserMessage() method, specify and pass a UserMessageParams object to the method as a parameter.

The following table lists the properties of the UserMessageParams.

Reply with a file message

When replying with a file message through the sendFileMessage() method, specify and pass a FileMessageParams object as an argument to a parameter in the method.

The following table lists the properties of the FileMessageParams.

You can retrieve message changelogs.

Each message changelog has distinct properties such as a timestamp of when a message was updated and a unique ID of a deleted message. Based on these two properties, you can retrieve message changelogs in two different ways: either by timestamp or by token. The getMessageChangeLogs() method requires a MessageChangeLogParams object to determine what messages to return. The results can also differ depending on a parameter specified in the method: either TIMESTAMP or TOKEN.

The following table lists the properties of the MessageChangeLogParams.

You can retrieve message changelogs by specifying a timestamp. The results will include changelogs that were created after the specified timestamp.

You can also retrieve message changelogs by specifying a token. The token is an opaque string that marks the starting point of the next page in the result set and it is included in the callback of the previous call. Based on the token, the next page will start with changelogs that were created after the specified token.

Once a reply is created or deleted from a thread, the onThreadInfoUpdated() method of channel event handlers is invoked. The method returns a threadInfoUpdateEvent object that has the latest information about the thread. This object needs to be applied to the parent message object.

Note: Like other messages, when a reply is created in a channel, the onMessageReceived() method of the channel event handler in client apps will be called.