This page explains the advanced features for open channels. Some of them are the premium features available only to a paying user.

To get the key-values items of a message, use the message.getAllMetaArrays() method. 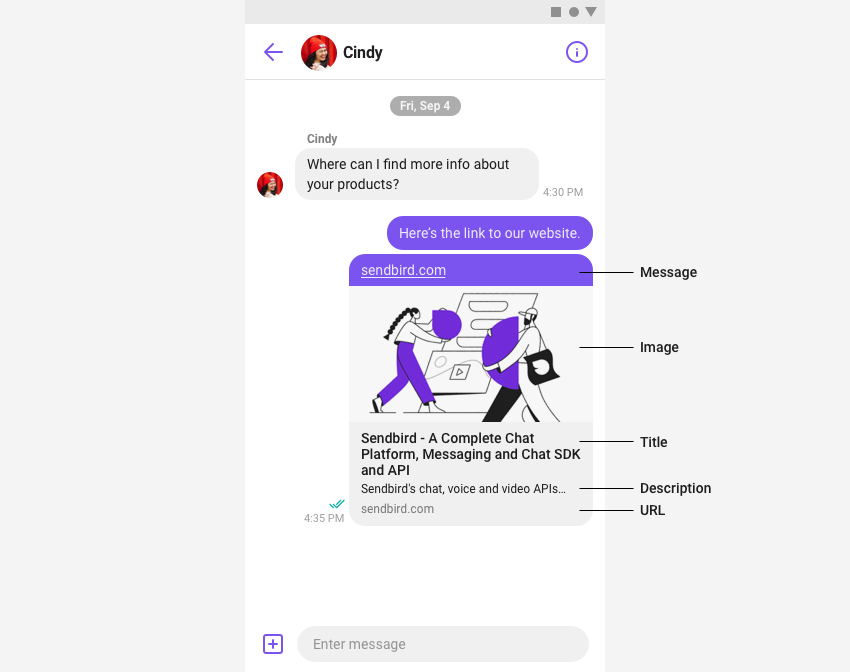 OGMetaData is a class that holds the Open Graph (OG) protocol-related data, including the four properties: title, URL, description, and image of an OG object.

Note: Some websites don’t provide the OG metadata fields mentioned above. In that case, even though the Open Graph protocol states them as requirements, all of the four getter methods may return null.

OGImage is a class that holds image-related data for an OGMetaData object. The OGImage class can also have six optional structured properties of URL, secure URL, type, width, height, and alt.

Note: Except for width and height, other fields such as URL, secure URL, type, and alt can be null. Width and height are set to 0 if the target website doesn’t provide such data.

Displaying an OG metadata object is available for two subtypes of BaseMessage: UserMessage and AdminMessage. If the content of a BaseMessage object includes a web page URL containing OG metadata, the BaseMessage.getOgMetaData() method returns OGMetaData and OGImage objects.

If Sendbird server doesn’t have cache memory from the OG metadata of the given URL, the BaseMessage.getOgMetaData() method can return null due to the time it takes to fetch the OG metadata from the corresponding remote web page. In the meantime, the message text containing the URL will be delivered first to message recipients’ client app through the onMessageReceived() method. When the server completes fetching, the onMessageUpdated() method will be called and the message with its OG metadata object will be delivered to the recipient' client app. However, if Sendbird server has already cached the OG metadata of the URL, the BaseMessage.getOgMetaData() method returns the message and its OGMetaData object instantly and the onMessageUpdated() method won’t be called.

When creating an open channel, you can additionally specify a custom channel type to subclassify open channels. This custom type takes on the form of a String, and can be useful in searching or filtering open channels.

The data and customType properties of a channel object allow you to append information to your channels. While both properties can be used flexibly, common examples for the customType include categorizing channels into School or Work.

To get a channel's custom type, use the openChannel.getCustomType() method.

When sending a message, you can additionally specify a custom message type to subclassify messages. This custom type takes on the form of a String, and can be useful in searching or filtering messages.

To embed a custom type into your message, assign a value to the customType under the UserMessageParams or FileMessageParams object. Then, pass the specified object as an argument to the parameter in the sendUserMessage() or sendFileMessage() method.

To get a message's custom type, use the message.getCustomType() method.

You can search for specific open channels by adding keywords to an OpenChannelListQuery instance. There are two types of keywords: a Name and a URL. The code sample below shows the query instance which returns a list of open channels that partially match the specified Name keyword in the names of the channels.

Using the setCustomTypeFilter() like the following, you can also search for open channels with a specific custom type.

Note: Supported file types are files whose media type is image/* or video/*. The Chat SDK doesn't support creating thumbnails when sending a file message via a file URL.

The sendFileMessage() method requires passing a FileMessageParams object as an argument to a parameter, containing an array of items which each specify the maximum values of width and height of a thumbnail image. The callback function subsequently returns a list of Thumbnail items that each contain the URL of the generated thumbnail image file.

A thumbnail image is generated evenly to fit within the bounds of maxWidth and maxHeight, which are provided through the ThumbnailSize constructor. Note that if the original image is smaller than the specified dimensions, the thumbnail isn't resized. getUrl() returns the location of the generated thumbnail file within Sendbird server.

This can be easily done by using the fileMessage.getUrl() method, which automatically adds the parameter auth with an encryption key of the current user to the file URL, and returns the unique URL for the user.

Note: Our default system setting is 5 messages per second. This limit can be manually adjusted only from our side. Contact our sales team for more information.

Note: Our default system setting is 5 messages per second. This limit can be manually adjusted only from our side. Contact our sales team for more information.

It is possible for text messages to be sent in different languages through the Sendbird's auto-translation feature. When sending a text message, set a List of language codes to a UserMessageParams object and then pass the object as an argument to a parameter in the sendUserMessage() method to request translated messages in the corresponding languages.

You can retrieve translations of a text message using the userMessage.getTranslations() method which returns a Map object containing the language codes and translations.

Note: This is one of Sendbird's premium features. Contact our sales team for more information.

Using the openChannel.translateUserMessage() method, you can allow your users to translate text messages into other languages when needed.

Note: This is one of Sendbird's premium features. Contact our sales team for more information.